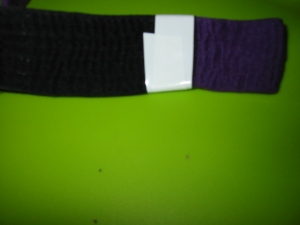 All the world will be your enemy
Prince with a thousand enemies.
And when they catch you
They will kill you.
But first
They must catch you!

You can run…. you can hide…. you can even leave your attendance card in the box so that it doesn’t get marked….. but the STRIPE FAIRY is still gonna get you in the end.

No-gi class in Bellevue. Began with a grueling series of warmups featuring all sorts of mutated pushups, backwards and forwards iron buffaloes, and anything else that Carlos’ twisted mind could come up with. Bear crawls with your partner backpacked on your back. Bear crawls with your partner papoosed on your belly. Thank God (blue belt) Lindsey was there today. Even she was almost too much for me. It wasn’t the weight that was the issue; it was more a problem of restricted limb movement with a human being pasted precariously to your torso.

Opponent is lying on hir back with you standing, hir feet on your hips, Push the feet to your left, swing RIGHT leg over the opponent, and drop with your right hip on top of hir left hip. Go to side control.

Same entry, only this time the opponent turns toward you and tries to swing hir leg over your head. Punch BOTH your arms to the other side, slide through using hir hip as the balance point, and take side control on the opposite side.

Opponent tries to double-leg you, you snap hir down and sprawl on top N/S. go to the side, reach both arms under opponent’s chest, grab far bicep with both hands, and pull to place opponent on hir shoulder. Keep weight on hir while you switch your arms so that the outside of your bicep is on hir clavicle. Now use “RNC” formation with your arms and lean your hip on hir head.

A couple of short spars. Carlos put a big white belt guy with me, and then gave him a lengthy talk about how he need not go easy on me. After he made the point three times, I said, “Okay, that’s enough! Now he’s going to kill me!” “I know thees guy ees a gentleman.” And the guy was, to the point that I actually had to reiterate to him that it was okay to put some weight on me.

I also had to have a talk with Lindsey, who is really hyperparanoid about hurting me (“but you’re so LITTLE!!!”) and won’t put barely an ounce of her her hulking 135lb down on me. She was doing that first guard pass drill brushing over my hip like a butterfly. I told her to be kinda careful of my RIBS, but she could thump down on my hip as hard as she wanted. She also wouldn’t complete her subs even with repeated urging. I tried to explain to her that as two colored-belt training partners who have worked together for a while, she needed to trust me to let her know if she’s going too hard, and trust me to know when to tap.

Next: Advanced class. It was a relief to see Kelly, whom I haven’t glimpsed since I crunched her elbow. I once again sought reassurance from her that I hadn’t injured her. Oh, she now has 4 stripes! Pam also got a stripe tonight! And- uh, well, me too.

We divided into teams of three and drilled double-leg setups from standing, then did the same inverted turn exercise that we did last night.

Then: opponent is in your guard. Pull hir fwd with legs and work hir bottom left gi tail free. Underhook hir left leg and feed the gi tail OVER your own thigh to the hand which is now underhooking the leg. Now you can scootch your butt out just a bit and go for- surprise- an armbar on opponent’s RIGHT arm!

If opponent pulls arm out, Keep ahold of the other grips and go for an omoplata.

If you go for the omoplata and the opponent hops one leg over you to straddle your head, you can (still retain those grips!) lunge up and force hir to continue the roll until you are on top. If you still have that gi tail, and now your weight down on hir, s/he can’t get out. Go to side control.

Several rounds of positional sparring starting from closed guard. I was working with Ron, and I was very pleased to try some of my new strategies when he inevitably went for deep half guard. I wasn’t able to get his head and package him up like Cindy had shown me… but I am very proud to say that I did **NOT** consign myself helplessly to the sweep and fall back on my ass. I did in fact manage to stay on top- it was messy, but I stayed there.