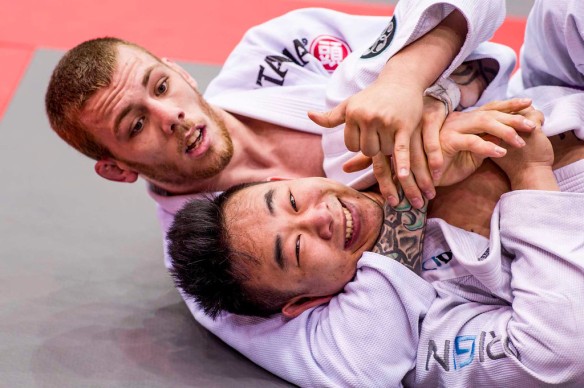 Japan has a concept called Shu-Ha-Ri. You can find it not just in martial arts, but in almost any traditional Japanese art.
The first stage is “Shu” which means “to preserve”. At this level, the student is expected to copy exactly what is presented until it becomes habit.
Then is the “Ha” stage, which means “to break”. Now the student starts to take apart and examine the material. With a strong base behind him, he has good examples of how things should be, and he has room to mess with things and determine the reasoning and principles behind them.
The final stage of “Ri” means “to separate”. At this point, the seeker is expected to take the core principles and make new expressions of them different from what he has been shown. –Campfire Tales From Hell

Yard work in the morning.

The Revolution is in two weeks, so we are doing a lot of positional training and king of the hill.

I find KOTH in no-gi to be particularly frustrating, as my usual lag behind the curve is more noticable then ever here. When it’s a “pass vs sweep”, “sub vs escape” type exercise, there’s very little room to recover from and compensate for the inevitable “I’m just going to hoist you over and place you where I want you because you’re so tiny” maneuvers.

One roll with Ron, whom I have not worked with in a very very long time. Unfortunately it has not been long enough for *HIM* to forget that I like to snatch guillotines from standing, and he was able to defend successfully. We both caught ourselves sticking feet in one another’s armpits begging to be footlocked. A persistant bad habit still needing more work.

Carlos pointed out another bad habit that many of us were doing… I’m not sure if I am doing it, but I need to pay attention and make sure I’m not… placing a hand on the mat beside opponent’s opposite hip while passing guard, before getting fully past the legs. This is begging for an omoplata. You need to place the hand on the hip. It is entirely likely that I am committing this sin, as I tend to drape myself very low over the opponent while passing guard, and I don’t like to brace on the opponent’s body because I’m scared of getting swept.