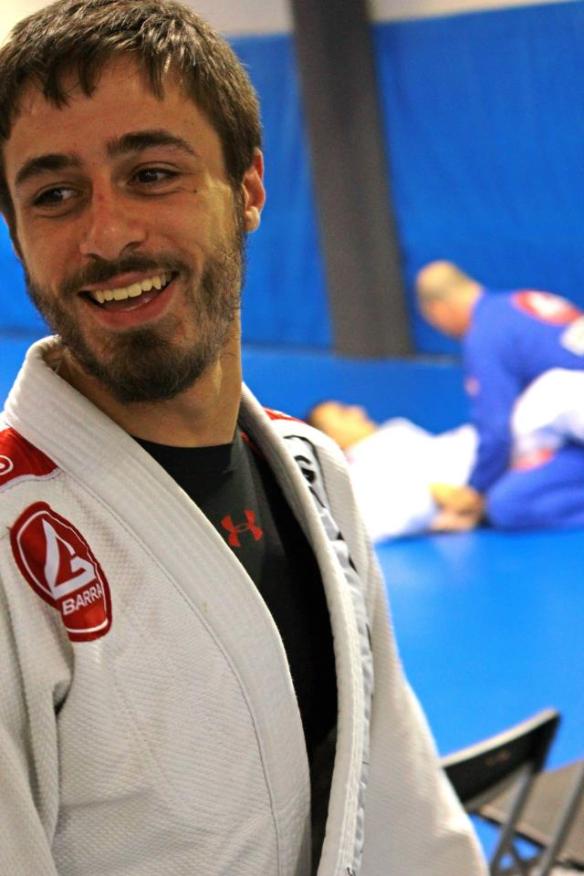 Maintaining honor and winning are indirect goals. Killing is a direct goal. Working toward direct goals peels a lot of bullshit off of your tactics. –Rory Miller

Then, double-leg setup switching to a rear bear hug. Trap the far arm (not the one on the side you circled around on), and point your face toward the trapped arm so that you don’t get an elbow in the nose.

I thought I could go without my headgear for a while….. it’s so damn hot…. and wound up getting “not-quite-cauliflower-but-getting-there”. Just from pressing the side of my head against the guy’s gi while I was doing the double-leg setups. Silver lining: this does prove that I’m being good about keeping my head up and pasted well against his side.

Spar with John. I managed to twist my bad ankle. I’m limping on it now, which ticks me off because I have a day of hiking planned tomorrow.

Spar with Amy, finally. She is pretty tough, but I was happy to see that I could handle her. I did notice a few improvement points for her, which I hope were helpful.

Double leg setups again, which I was not thrilled about due to my gimpy ankle and the fact that my knees where still whimpering about the previous round of double leg setups. Carlos showed us a new one, involving grabbing both heels (one from the outside, one from the inside). He didn’t really talk about the shoulder pressure on the leg, but I was pleased to note that even though I have never seen anything like this before, I was able to ID that shoulder pressure on that particular spot as the REAL meat of the technique.

You are in side control and moving to mount, opponent bridges toward you, you pop over hir back and S-mount. Advance to armbar or ezekiel, depending on whether the arm is over or under yours. I struggled with this because I had to keep pausing to note where the arm was and then try to remember which option that meant taking.

A little KOtH from closed guard, pass vs sweep. I did pretty poorly at this, despite the fact that we were divided into 3 weight classes and I didn’t have to deal with the behemoths tonight. I was getting pretty tired by this time.

One roll with Lindsey. I got a tap, which made me happy, as she makes me work for it.

I’m having some trouble keeping my weight from creeping up, now that I’m taking a break from comps. I’m trying to gear up to go on a little diet. I think disciplining myself about snacking at work is going to be a major key right now.