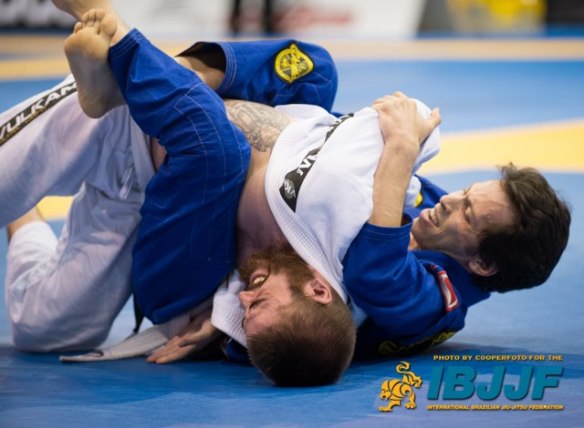 Often, the obsession for being fair and objective under all circumstances transforms our mind into a tribunal. We want tangible proofs and objective evidence to believe in what we already know. Unfortunately, intuition is not objective and offers no proofs. It travels on tracks that are much too fast to wait for the painfully slow speed at which logical analysis moves. Rational understanding arrives at the finish line hours later (if it arrives at all), only to confirm what intuition has already revealed to us. -Daniele Bolelli, On The Warrior’s Path

I skipped Saturday “basics” class in favor of coming in an hour later for “comp” class, since Carlos typically whips us into such a froth in the first hour that I run out of gas and can’t do the second, and lately Cindy has been coming in for the second…. so I miss her.

I was kind of wistful watching everyone busting a dire move for the last 10 min of Basics…. but it appears I’m not alone in feeling that the double dip is rough, as only about a dozen hardy souls stuck around for comp class.

All sparring. Some 4-stripe white belt guy that I don’t know, Ian, Pat, Prof Dave. Felt competent but not stellar. I’m happy with “competant”, considering the caliber of Ian/Pat/Dave.

Then I rolled no-gi with Cindy for a while, and worked the Livestock takedown (which I am ***STILL*** not doing right, Gods help me. I don’t know how she maintains her patience with me. It must be like trying to teach a pig to sing.)

One hilarious interlude….. at one point I found myself behind her shoulder and my forearm clamping across her throat. I had about six incredulous seconds of thinking, “What the FUCK??!!?? Is she going to let me have a choke??!?!!” I have never tapped Cindy, or gotten a dominant position that she didn’t gift to me, or held said dominant position for more than about three seconds. If you told me I needed to either tap Cindy Hales or fly to the moon, I’d be hopping around and flapping, because believe me my chances are better there. I was stupefied with shock. Then it suddenly came to light that Rodrigo was talking at her from the sidelines and she had paused to converse with him, only I didn’t notice we were pausing. She then accused me of cheating, and I responded that Rodrigo and I had plotted out that whole double-cross before she arrived.