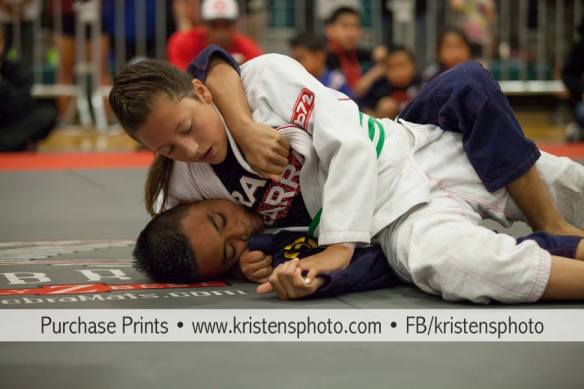 The weapon will not make you safe. It is a tool you can use. –Rory Miller

A solid hour and a half rolling with Kelly. I gave her her choice of gi/no gi, and she picked gi.

I was worried about my right shoulder, which I seem to have wrenched while I was playing with the cop this morning- but apparently it is on that fine line where it twinges a lot while I’m going about my life yet I can mostly ignore it in the heat of battle.

Kelly tapped me three or four times for every one that I got on her, but the ones I got on her were omoplatas- which makes me happy, since I don’t go for those very often and rarely get them when I do. Kelly’s shoulders are rubbery. I had to resort to Cindy’s (mean!) variation, where you latch your arms around the opponent’s head/shoulder and pull up.

Kelly has become one of the few people who can reliably get out of my half guard- using the same trick that Peter has been using (Peter being one other of those very few). She was kind enough to show me how to counter it. 😉